Strangford Lough is one of the largest sea loughs in Britain and Ireland. In ecological terms it is unique and the jewel in Northern Irelands coastline. It has the a great deal to offer sea canoeists at every level, from sheltered backwaters for introducing novices, to powerful tide races, overfalls and whirlpools for the more experienced. The old name for Strangford was Cuan (meaning safe harbour) but the Vikings renamed it Strangford or "The Violent Fjord".

As the tide rises, it begins to make its way into Strangford Lough - an area of 150 square kilometres of sea or 1650 million cubic metres (approx.) of sea water at high tide. It takes approximately 350,000,000 cubic metres (or tonnes) of water to fill the Lough from low water to high water and all this water can only get into the Lough by passing through "The Narrows". The Narrows are 5 miles long and at its narrowest point, only 2.5 cables (500 metres) wide. Hence a vast river of water rushes through the Narrows at speeds of up to 7.5 knots.

During the flood tide which begins at -0345 HW Dover, the bar mouth entrance to the Narrows is straightforward and fairly safe. However, during the ebb, a heavy breaking sea can be encountered. This is particularly dangerous with any form of wind from the south to east creating a swell. Breaking seas of up to 8 metres have been seen (from a car along the shore!). (Check:Weather & Tide)
View map


Some overfalls and general broken water occur around the Angus rock both on the flood and ebb tide (see tidal stream atlas). On spring tides during the 1st to 3rd hour of the ebb, an interesting grade 2 style rapid occurs on the north side of the Angus rock. This can reach up to about grade 3 with a diagonal stopper during very big equinoctial springs. There is a drop in sea level across the rocks of about 3 feet and it is possible to get good surfing and pop-outs etc. on the stopper wave formed.

On the last hour of the ebb, an enjoyable set of waves often form, again on the north side of the Angus rock where you can join the seals for some surfing. For the more experienced and confident, excellent deep water surf waves are formed at the bar mouth and it is always advisable to only play here on the last hour of two of the ebb.  (Check: Weather & Tide)

There are 2 species of seal to be found around our coasts. They are the common or harbour seal and the grey seal. They are quite distinctly different. The common has a spaniel dog type of head and is considerably smaller that the grey which has a flat head with a large obvious nose. There are about 400 common seals and 80 grey seals in the Lough.
The common seals give birth in June and it is most entertaining to watch the antics of the pups from the quiet position of a sea kayak. The greys give birth in October and it is a rare and beautiful sight to see the white furry pups to these much larger seals.

Just north of the Angus rock, another small set of overfalls are formed, especially on the flood tide. There is an obvious sea level drop followed by small boils and whirlpools.View map

The next point of interest is the Routen Wheel. This is characterised by heavy boils, whirlpools and short-lived but violent stoppers. It is caused by a ledge of rock only 4.6 metres below the surface, 1 cable south of Rue Point. The name "Routen Wheel" was given by the Vikings as they thought the sound of it was like cattle snoring.

The wheel occurs during both the flood and ebb tide although it tends to be more violent during the ebb. The turbulence lasts for about 2 cables (400m) and any swimmers can easily be collected beyond the turbulence. However rescues should be swift due to the speed of the current (7.5 knots). It is safer to play in it during the flood. It is quite easy to avoid the wheel by keeping to the west side of the channel or hugging the coast down the east side. A good point to view the wheel is from the wee island just to the south-east of Rue Point. A good eddy exists between Rue Point and Gowland rocks, so that a number of runs of the wheel can be enjoyed. The area around here is used a lot by seals to haul out on the rocks. Care should be taken not to disturb them from their haul outs as it can cause injury to them.

One of the greatest dangers on the Narrows is the potential for being run down by the ferry which runs between Strangford and Portaferry. This ferry has to contend with a 6 knot tide and does a remarkably efficient ferry glide across the flow. The Captain does not appreciate having to contend with dodging canoeists as well. The ferry departs Strangford on the hour and half hour and departs Portaferry every quarter past and to the hour. The crossing time is about 5 minutes.

The tidal strength decreased from 6 knots between the two towns to 4 knots at Ballyhenry Island as the water disperses into the Lough. It further reduces to about 1.5 knots at Dunnyneill Islands. Audley's Castle, built in the 16th Century, lies on the west side of the Narrows about half a mile north of Strangford and is worth a visit. It is possible to land at the little beach and jetty beside it and climb to the top where there is an excellent view of the narrows and the towns of Portaferry and Strangford.

"Exploris", an excellent aquarium, is situated within a minutes walk from the main slip at Portaferry and is well worth a visit as it has displays of the marine wildlife of the Lough and the Irish Sea.

Another place well worth a visit is the barn at Castleward, owned by the National Trust. This is situated in Castleward Bay at GR 575497. Access from the water is best gained during HW as there are extensive mud flats in the bay. The Barn has excellent audio visual displays of the marine wildlife, particularly the bird and mammal life found in the Lough. They also have a number of excellent videos on the wildlife of the Lough. Entrance to this facility is free of charge.View map

The east coast of the Lough has a lot less of interest to the canoeist that the west due to the lack of islands etc.. However, at "The Dorn" (GR 593568), there is a reasonable tidal flow up to 2.5 knots, especially on the ebb and a spectacular marine waterfall about an hour to two hours after high water.View map

The west side of the lough is a fascinating maze of submerged drumlin hills forming over 100 islands and rock pladdies. Chapel and Jackdaw Islands are the first to be reached when paddling west out of the Narrows. In the spring, Jackdaw is an important nesting site for terns and so should be avoided. Many of the islands have large colonies of Irish Hares which can be often seen running along the beach.

Within the Quoile Estuary (2 miles west of Audleys Point), lies Salt Island, one of the many islands owned by the National Trust. The Trust have built a bothy on the south-east side of Salt which was an absolutely superb facility for the canoeist looking for a bit more comfort than a tent. The Bothy slept 12, had an open fire, gas cooker, running water and a couple of WC's. However, due to stringent new health and safety laws, it cannot be used at present. Camping is permitted on Salt Island.

To the south-west of Salt Island lies the Slaney River where St.Patrick landed in 432 A.D.. He must have landed here during HW or he would have had to slog through the stinking mud to reach the shore. He went to Saul and was confronted by the local Chieftain who became Patrick's first convert to Christianity in Ireland.

Heading north from the barrage which protects Downpatrick from tidal flooding, there is Gibbs Island which is one of the few islands within the Lough to have trees. There are some mature Scot's Pines on Gibbs. Further north, out of the Quoile estuary, the first major island to be encountered is Island Taggart. This is one of the largest islands in the Lough and used to support two small farms. These belong to the National Trust and are well worth a visit as they show what life on the island was like. Look out for the coffin in the barn!! They were also used for the film "December Bride", a story of life in the area in the early 1900s. Foxes, badgers and otters are all resident on Taggart, meriting an overnight camp and exploration. Camping is permitted.

Between Tagart and Mahee Island (4.5 miles north), lies the "basket of eggs" - dozens of little islands which are excellent for night navigation as they are sheltered and safe. Tides can run at about 1-2 knots during springs in a north/south direction between some of the islands and particularly through Ringhaddy Sound.

Green Island Rock (GR 545 602) is often used as a haul out for common seals and is very accessible for a group of novices to experience canoeing with seals.View map

To the west and north of Rainey Island, two channels exist where the tide runs at up to 5 knots in its rush to fill or empty Reagh Bay. Again, this is an excellent area for introducing novices to moving water. HW in the area is at approximately +0220 HW Dover.

Mahee Island has an old Celtic Monastery and early Celtic monks were believed to have occupied the area from the 5th to the 10th centuries. North of Mahee Island holds little of interest to the canoeist, unless you're into mud wrestling in a big way, as large expanses of mudflats exist in this area. The mudflats do however support vast numbers of waders and during the winter. Due to its importance, the Lough has areas which are designated for their beauty or scientific importance. Legislation protects this valuable and unique area. Access is unrestricted in the Lough and conservationists rely heavily on the goodwill of recreational users. The National Trust (NT) has produced "The Castaways Code" and map for those using the Lough for recreational boating. This should be consulted before paddling in the Lough during the nesting season (April-June) and the islands marked "Birds Welcome" should be avoided.

An extremely good relationship exists between canoeists and the conservation bodies in the Lough. It is in all interests that this should be maintained.

Access points within the Lough are few. The best are atCunningburn (GR 539704)Kircubbin (GR 565636)Killyleagh (GR 529521)Ringhaddy (GR 536584) andSketrick Island (GR 525627)There is limited parking both at Killyleagh and Sketrick and no parking facilities at all at Ringhaddy. 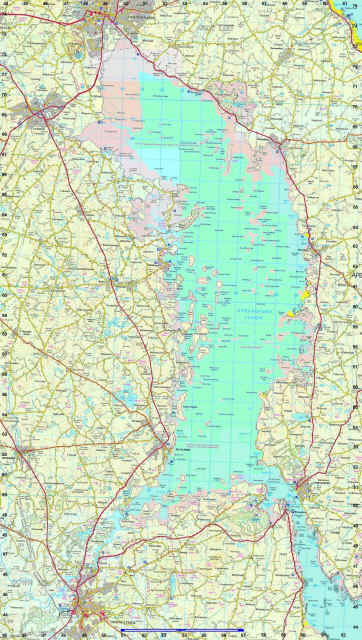